On April 12, 2016, we submitted a Public Records Act Request to California State Parks for all collisions from 2014 to Present.

112 collisions over a five years equals an average of approximately 1 collision every 2 weeks. According to Park Leadership, "if the number of non-reported paved-road collisions involving bicycles vs vehicles and solo bikes were included in this report, the overall totals would be significantly higher."

Most Likely Time of Day for  Collisions: Between 11 AM and 3 PM

Most Likely Time for Bicycle Paved Road Collision: Between 11am and 3pm

The document below, is the only analysis of Traffic Collisions on Mount Diablo from 2005 to the present conducted by Park Leadership from 2005 to April 2015. 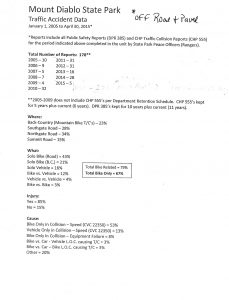