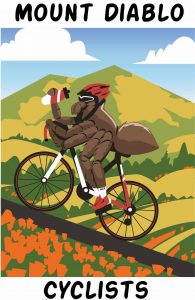 This is a Story of Dogged Determination to Prevent Collisions and Save Lives on the Roads of Mount Diablo. "Never doubt that a small group of people can change the world, indeed it is the only thing that ever has.”

Mission to Improve the Safety for Cyclists, Motorists, and Pedestrians on the Roads of Mount Diablo State Park. JOIN US: Mount Diablo Cyclists Facebook with over 1,700 devoted and passionate members.

Ask yourself these questions:

The Journey (genesis) of Safety Improvements and the creation of Bike Turnouts began in 2010.  As we pedaled up the mountain, we began riding with and listening to other cyclists. We were shocked and horrified as they shared their “Near Death” cycling stories. We discovered that Park visitor drivers were frequently passing ascending cyclists on blind curves and nearly hitting descending cyclists. When we and other cyclists reported/videoed Near-Miss Bike vs Vehicle incidents to Park Rangers, Supervising Ranger, and the MDSP Superintendent they said; “if we didn’t see it, there is NOTHING we can do.” When we asked California State Parks (law enforcement officers) about actual Bike vs Vehicle Collisions, we were told “they rarely happen, it’s usually the cyclist's fault, speed.”

As the months passed, we also realized that actual Bike vs Vehicle Collisions were occurring and State Parks were doing NOTHING to prevent them, nor analyze the cause(s) or implement any safety solutions to prevent collisions and the resulting injuries.  The San Ramon Valley & Contra Costa Fire Departments were responding to medical emergencies on Mount Diablo almost every other week. Helicopters from CalStar - Reach(cost $24,000+), and/or the CHP or Contra Costa were often seen on the mountain transporting Park visitors to local hospitals.  As we began asking more questions of State Parks Leadership, we were met with "radio silence," indifference, and a complete lack of concern for the safety of cyclists on the roads of Mount Diablo.

In 2014, Mount Diablo Cyclists was established because of the callous indifference of the California State Parks to keep cyclists safe on the roads of Mount Diablo. Near-Miss Bike vs Vehicle Incidents and actual Bike vs Vehicle Collisions were frequently occurring and California State Parks was doing NOTHING to understand why, nor make any effort to prevent the resulting injuries to Park visitors who ride bicycles.

In 2014, we asked the Supervising Ranger if Park Aides counted cyclists as they entered the park at North and South Gate Roads. He said, " No, we don't count cyclists." A few weeks later, we discovered all Park Aides work for the Supervising Ranger and were counting cyclists as they entered the park and recording the data on a State Parks form. When we presented the evidence to the Supervising Ranger, he said, "we don't count cyclists, they don't matter!" As a result, we submitted a Public Records Act Request for the Monthly Visitor Attendance Reports (DPR 449) from 2013 to 2015. We discovered that the "Free Day Use" category was almost entirely bicycles. The form was sent each month to the District Office and then to California State Parks where it appeared each year in the California State Park Statistical Report (103,000 Free Day Use (cyclists) for FY- 2013/14).

According to the MDSP Superintendent "in 2014 between 130,000 to 150,000 cyclists rode up Mount Diablo." On a typical weekend day, up to 500 drivers share the roads with approximately 700 cyclists. According to our surveys, 60% of the vehicles on Mount Diablo are bicycles!  Since 2014, there has been a significant increase in the number of cyclists riding up/down Mount Diablo. According to the Bay Area News Group (10/2/15): "there is already too much blood on the hands of lax park officials. If they don't move quickly, there will be more." According to Channel 3 News (2/3/16: "it's only a matter of time before someone dies or gets seriously hurt."

In January 2015, we began meeting in the Training Room on Mount Diablo monthly with Park Leadership. We continued to meet monthly throughout the winter and spring in the hope that Park Leadership would realize the daily threat to public safety and implement solutions. According to Channel 7 News (10/23/15): "State Park officials are taking too long to fix a dangerous problem that has led to bike vs. car crashes and serious injuries." We requested California State Parks conduct the first-ever Road Traffic Survey per Caltrans standards. We were repeatedly told there is no need and no money, “it’s never going to happen.” After months of stalling and delay followed by "I'll get back to you." We realized that Park Leadership was NOT serious about improving the safety of cyclists and motorists on the roads of Mount Diablo or implementing any changes to prevent collisions! Promises were made but not kept, emails went unanswered, and multiple excuses were made. According to the Bay Area News Group (8/3/15), "Unfortunately, they continue to meet bureaucratic foot-dragging. "As a result, we decided to contact elected officials, local newspapers, and Bay Area TV stations, distribute a petition (1,225 signatures), gather public support, and meet with local organizations. According to the Bay Area News Group (10/2/15): "Too much blood of bicyclists is spilled on Mount Diablo road," and, "if they don't move quickly, there will be more."

On April 2, 2015, we submitted a Public Records Act Request to State Parks for all Traffic Collision Reports from 2005 to the Present. On April 17, 2015, we received 112 Traffic Collision Reports from 2010 to the Present (4/17/15). According to Park Leadership: "(we) recommend contacting the California Highway Patrol to get a complete picture of all of the collisions on Mount Diablo State Park." Therefore, we worked with the California Highway Patrol and discovered that a collision was occurring on these roads approximately every two weeks.

We identified the "commonality factor," the majority (80%) of ALL types of collisions were occurring on or near blind curves. That equated to 25-30 collisions per year!  Unfortunately, according to Public Records Act Requests, Park Leadership did not conduct any analysis of the Traffic Collision Reports from as far back as 2005 until April 30, 2015.

Public Record Act Requests: Unfortunately, California State Parks has not been willing to openly share public documents with the public. As a result, we have submitted numerous Public Records Act Requests.

On April 4, 2016, we submitted a Public Records Act request for Traffic Collision Reports(CHP-555), all vehicle and/or bicycle collisions from 2014 to the present. The 49 TCRs were not received until 10/20/17, 18 months later, and only after State Parks received a letter from King & Spalding LLP.

On October 7, 2014, we published the Mount Diablo State Park, Free Day Use (cyclists) Report, which was reviewed and edited by the MDSP Superintendent. 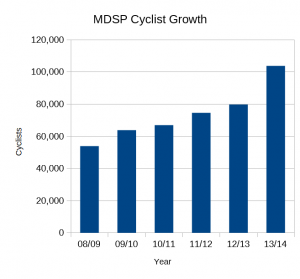 In addition, the only evidence we've discovered that Park Leadership implemented any safety improvements to prevent collisions from 2005 to 2015 was a sign. DMC (Diablo Multi-Sport Connection), a woman's cycling/swimming/running club 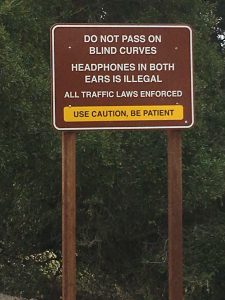 initiated and funded two permanent and two sandwich board signs (8/16/13). All Park Leadership did was install the signs in the ground.

Since 2015, we have met numerous times with Park Leadership and requested we work together to analyze Traffic Collision Reports. According to the Bay Area News Group(7/31/15), "Indeed, the accident reports understate the injuries. That's because accident victims often get transported off the mountain before the incidents are reported to park rangers." As of March 2018, Park Leadership has not seemed interested in collaborating to analyze the 161 Traffic Collision Reports from 2010 to 2017.

In addition, Park Leadership told us they are not interested in working together to locate the 161 Traffic Collisions Reports on a Google Map. This would allow State Parks to identify the most dangerous curves where collisions repeatedly occur and perhaps install Bike Turnouts to prevent injuries and possible fatalities. We have made this request since 2015. 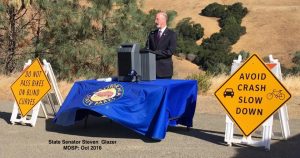 Frustrated by what we felt was a lack of sufficient concern on the part of State Parks, we met with State Senator Steven Glazer and Assemblywoman Catharine Baker in 2015. We showed them the Traffic Collision Reports, 24 of which documented Bike vs Vehicle Collisions. They quickly recognized a clear and present danger to Mount Diablo State Park visitors. 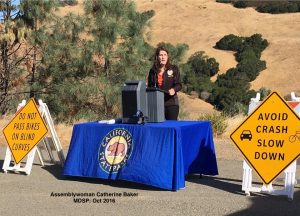 As a result of their bipartisan leadership and the support of the public and the media, California State Parks was then pressured to begin implementing significant safety improvements for cyclists and motorists on Mount Diablo.

In 2016, funding was found to implement a Road Striping and Signage Project on the roadways of Mount Diablo, engineered according to Caltrans standards. According to the Bay Area News Group (10/2/16): "It's a welcome reversal from the foot-dragging just a few months ago." The new safety improvements of the project include: DO NOT PASS BIKES ON BLIND CURVES (35 signs), AVOID CRASH SLOW DOWN (35 signs), Bike Sharrows every ½ mile in the ascending lanes, additional STOP signs, revised warning/speed signs and Solid Double Yellow centerlines.

In February 2017, we met with Park Leadership to discuss safety issues and near-miss collisions which occur frequently at blind curves. Uphill-bound motorists were still crossing the Solid Double yellow centerline to pass cyclists, with the possible result being a serious injury or fatality. However, we were told, " State Parks has done enough to improve the safety on Mount Diablo and we are not going to do anymore." As a result, we once again reached out to elected officials, local media created a website, distributed a Bike Turnout Petition (1700 signatures), met with local organizations, and gathered public support.

On Dec 1, 2017, State Senator Steve Glazer and Assemblywoman Catharine Baker sent a letter to Lisa Mangat, Director, California Department of Parks and Recreation requesting, "working to develop a plan to implement the overall bike turnout program in Mount Diablo State Park." In addition, "immediate installation of the 10 to 11 bike turnouts that have been mutually identified by Mount Diablo State Park Leadership and Mount Diablo Cyclists." According to the letter; "these turnouts can be installed by sweeping away rocks and debris and painting existing asphalt for under $5,000." On Feb 1, 2018, 10 New Bike Turnouts were installed/painted on Mount Diablo for a total cost of only $5,000!

According to a Public Records Act Request, MDSP has an estimated annual loss in revenue of over $100,000 per year.

Park Leadership and Mount Diablo Cyclists worked together from 2016-to 2017 to design and install three Bike Turnouts as a pilot study. Bike Turnouts allow a cyclist pedaling uphill to move slightly to the right, thereby allowing a motorist to pass safely without crossing into the downhill lane, and possibly colliding with a descending cyclist. 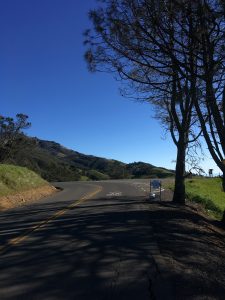 On September 1st & 7th, 2017, Park Leadership and Mount Diablo Cyclists identified 48 potential locations for Bike Turnouts. In December 2017, Park Leadership added an additional 29 locations, for a total of 77. We believe that the ultimate goal of preventing Bike vs Vehicle Collisions, and the potentially fatal consequences thereof, more than justifies the investment.

Many of these potential Bike Turnouts locations are where past collisions (160+) have occurred and will occur again if we do not act quickly to install Bike Turnouts on the roads of Mount Diablo.