Mount Diablo Cyclists has conducted multiple surveys of cyclists and motorists visiting Mount Diablo.  We believe that the responses to the survey questions provide valuable insight into the observations and opinions of both user groups.  This feedback helps guide the recommendations that are made to State Parks on behalf of both groups.

In January 2018, Park leadership again agreed to contribute to the questions posed in the next Motorist Survey. However, there was no response to an email, a phone call, and then a personal meeting; no input to the proposed next survey was offered.  An additional email was written, and two phone calls were made to Park leadership in February, but to no avail: the promise to contribute to the Motorist Survey remains unfulfilled.

Therefore, Mount Diablo Cyclists plans to continue with surveys of motorists and cyclists, compile the data, and post it on this website 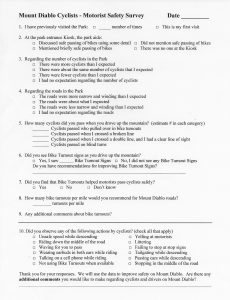