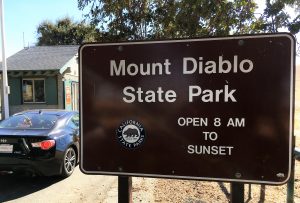 Many cyclists and hikers would like to enter the park at 7am for a variety of reasons.  Some want to get in a ride or hike before going to work, while others would like to commute to work through the park.  Others want to beat the heat during the summer months.  Many want to get their ride or hike started before the park roads get crowded on weekends.  Mount Diablo Cyclists support these riders and hikers.  Not only do the individuals benefit by earlier access, but the Park benefits by reducing Bike vs. Vehicle collisions and Near-Miss Bike vs. Vehicle Collisions.

The posted park opening hour is 8:00 am.  Often, park gates are opened before this time.  The Supervising Park Ranger has told Mount Diablo Cyclists that “he considers the park open once a gate is open.  If you get there before 8 and the gate is open, you may enter the park.”  If the gate is closed and you enter, you may be stopped by a ranger.

According to State Parks documents obtained by Mound Diablo Cyclists via Public Record Act requests, our own Motorist & Cyclist Surveys, and conversations with Staff/Visitors: