Bike Turnouts have the potential to significantly reduce the number of collisions, serious injuries, and possible fatalities! 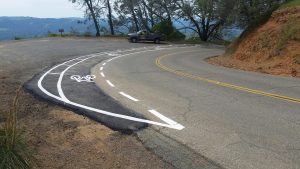