Since May 2018, we have asked State Parks these questions: 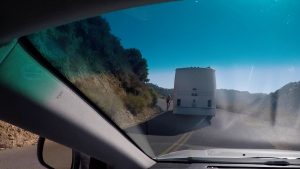 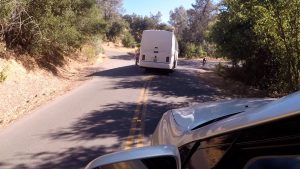 No one is trying to prevent children from visiting this beautiful mountain. Just the opposite, we want children to enjoy the amazing outdoor activities. As parents and grand parents, we were shocked and concerned for the safety of children(40-50) on theses Buses.  Perhaps use smaller buses and return children safely to their parents, which is what the Athenian School did in 2017, when they came to the conclusion that 40ft Buses were unsafe. (Please watch the videos below.)

Borenstein: Buses on Mount Diablo pose danger to everyone

Near-Miss Bike vs Bus Collision! According to a cyclist; "I experienced a Charter Bus on a descent in Apr/May 2017 just below Diablo Ranch (similar to the photo below). The bus couldn't make the hairpin turn and was straddling into my lane. Luckily, I was descending in the right hand area of the lane & my killer skills circumnavigated around it. I was sort of surprised since I figured I'd never encounter such a big rig on Diablo given the narrow roads.

On July 18, 2018, a cyclist reported: “This PG&E truck (37ft), pulling a trailer, passed 3 cyclists on a blind curve. We were just below the second turnout above the junction. He took the full downhill lane to pass. Luckily no one was descending at that point. If he had waited a few seconds, we would have used the turnout and he could've passed us safely. I will try to report this to PG&E.” 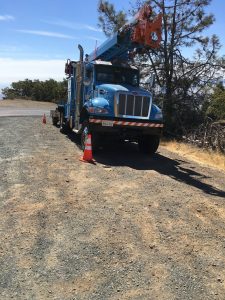 On Sept 24, 2018, a cyclist reported: "this large truck with a fork lift on the back drove up South Gate Road and stopped at the Kiosk (7:45am)." "Their was no Park Aide at the Kiosk, so the driver called the number he was given, no one answered. "The driver said, if he had known how narrow the roads were, he would of driven a smaller delivery truck." "The truck driver continued driving, crossing over solid double yellow lines at every blind curve." 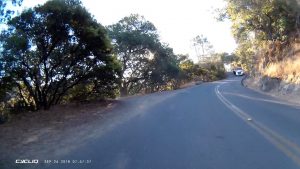 On Oct 16, 2018 a cyclist reported: "these large vehicles were crossing over the centerline, especially on Blind Curves." "They seemed to be driving in the downhill lane." 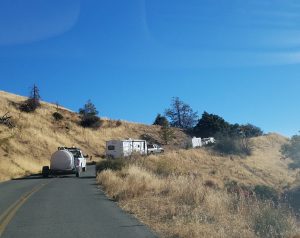