Skip to content
CALL TO ACTION: All Cyclists and Friends, we need 10 minutes or less of your time to save the life of a friend, mother, father, son, brother, husband, wife... Someone from our cycling community! Our biggest and most important undertaking to date - the Funding of 77 Bike Turnouts Project#2019-05 in Mount Diablo State Park. 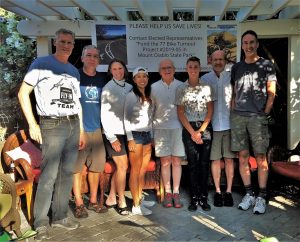 Your immediate help is critical. Please read below and follow the steps to have your voice heard. Our elected representatives are waiting to hear from you. They will help find the funding if they receive several thousand letters from us all. We need everyone to participate in order for this campaign to be successful.
Send a letter(helpful information provided below, to help you create and send this letter), share this link with your clubs and friends and make a comment on this post once you've responded. PLEASE HELP US PREVENT A COLLISION AND SAVE A LIFE!
"Tell your State Representatives: Fund the 77 Bike Turnout Project #2019-05 in Mount Diablo State Park!"
Use the official links below to contact All Three elected representatives!
(Include your personal experience, Sample letter & Videos below)
(Visit michaeln294.sg-host.com to Read the Entire Plan)
1. State Senator Steve Glazer - To send comments use this official link https://sd07.senate.ca.gov/contact/email
2. Assemblymember Rebecca Bauer-Kahan - To send comments use this official link https://lcmspubcontact.lc.ca.gov/PublicLCMS/ContactPopup.php?district=AD16
3. Assemblymember Tim Grayson - To send comments use this official link
https://lcmspubcontact.lc.ca.gov/PublicLCMS/ContactPopup.php?district=AD14
Please Include in Your Letter to Elected Representatives:
Bike Turnout Videos
https://www.youtube.com/watch?v=aUuc7eCC4Cw&feature=youtu.be
https://www.youtube.com/watch?v=pGBOh1ojOH8&feature=youtu.be
https://youtu.be/bdBg3jzHNRc

1.) When will State Parks Approve and Fund the 15 Highest Priority Bike Turnouts__________? (Ref: 48/68 Bike Turnouts Identified in 2017, NO Bike Turnouts Approved or Funded in 2018 or 2019, Letter - 15 Highest Priority Bike Turnout Locations dated 11/28/18. Bike Turnouts are supported byelected leaders, Mount Diablo State Park Staff and volunteers, the California Highway Patrol, Bike East Bay and other cycling organizations, and a petition with over 3,300 signatures. Surveys from motorists and cyclists alike, and video images all support the potential of Bike Turnouts to significantly reduce collisions, injuries, and possibly fatalities. We believe that the ultimate goal of preventing a Bike vs Vehicle Collision, and the potentially fatal consequences thereof, more than justifies the investment.

2.) When will permanent signs and striping be installed on all 13 of the current Bike Turnouts_______? (Ref: In 2016, Park Leadership and Mount Diablo Cyclists collaborated to design and install 3 Bike Turnouts as a pilot study. In September 2017, we collaborated with Park Leadership to identify locations with sufficient pavement to install 10 more Bike Turnouts for a total cost of less than $5,000. Finally, after a letter from State Senator Glazer and Assemblywoman Baker, these 10 were installed in February 2018. Email, Ryen Goering, "Permanent signs have been ordered with our Sign Shop in Sacramento, we hope to have them delivered to us by 2/28/18 and installed by 3/3/31/18."

3.) When will the Verbal Motorist Safety Advisory be given to all motorists__________? (Ref: Mandated by State Parks in 2017, Cyclist (1/1/18) and Motorist (2017) Surveys). According to Park Leadership and supported by responses in Motorists Surveys: "most motorists entering the Park have never been to Mount Diablo before and are unaware that they will share the narrow winding roads with hundreds of cyclists."Providing a brief but thorough VMSA to all drivers is a top priority.  The two entrance Kiosks are staffed just over one-half of the hours that the Park is open. Therefore, thousands of motorists enter the Park every year without the opportunity to hear the VMSA.In addition, many of the Park Aides only paraphrase a few words of the VMSA to motorists.

5.)When will Rangers start issuing citations to motorists for crossing solid double centerline, passingon blind curves or violating the 3ft rule __________? (Ref: Public Records Act request, 6 citationsissued in 2017 and only 5 citationsissued in 2018). In 2018, NOT a single citationissued to amotorist for crossing the solid double centerline, passing on ablind curve or violating the 3ft rule! (Ref: citations issued from 2010 to 2018 -- Cyclists were significantly more likely to receive a citation than a motorist).

8.) When will State Parks respond in writing, to the letter sent to Lisa Mangat, Director California State Parks __________? (Ref: Letter dated 11/20/18, Marivel Barajas promised to respond in writing at meeting in Sacramento 11/26/18 and again in email on Dec 20, 2018; "Parks will be providing a response to the letter that Mount Diablo Cyclists (MDC) sent to Director Mangat."

9.) When will State Parks provide guidance to Park Aides to accurately count cyclists (Free Day Use)____________? (Ref: State Parks Statistical Reports, MDSP Visitor Count Reports and MDC Reports from 2014 to 2018.  Use of an electronic counter has been proposed previously).