According to over 10 years of research and analysis of California State documents received per Public Records Act (PRA) requests:

Over the years, we have submitted numerous Public Records Act (PRA) requests to California State Parks requesting the Traffic Collision Reports (TCR) (CHP-555) and the Public Safety Reports (DPR-385). For the last several years, the California Highway Patrol (CHP) has investigated the Bike vs Vehicle Collisions on Mount Diablo and completed the TCRs, NOT MDSP Park Rangers. As a result, additional PRA’s were submitted to the CHP to receive the TCRs.

The CHP Statewide Integrated Traffic Records System (SWITRS) database and statistical reports were also analyzed and cross-referenced with All public documents. In addition, we recently received the Mt. Diablo SP Reference Map which identified 17 Bike vs Vehicle Collisions from 2010 to 2021. The map was provided by Eddie Guaracha, Superintendent of Diablo Range District. The map identified only 17 of the 45 Bike vs Vehicle Collisions that occurred from 2010 to 2021.

54. 3/27,2018 Tuesday (1831hrs), North Gate Road, Blind Curve, Garrett Lew, Male, Injuries. According to the Traffic Collision Report# 180327NOR-0095: The Park Ranger said; “While traveling at speeds between 25-45MPH in a posted 25 MPH zone, I was finally able to catch up with LEW after more than 3 miles.” According to LEW, the Park Ranger “waited to turn on and blast his siren until he was approximately 50-100 ft behind me, just as I was entering a blind curve, frightening and startling me, drawing my attention for a split second away from the direction that I was traveling and subsequently causing me to crash into the ditch.” According to Sergio Estrada (cyclist), “He pulled up behind me fast and sirened me just like you, I almost crashed too, but I wasn’t going that fast, he just passed me and kept going. You were pretty far ahead at that point.” (photo below of the Park Ranger Pursuit vehicle)  Open this Link to Read California Department of Parks and Recreation, Vehicle Pursuit Policy 315, and Open this link to view Garrett's Video Story

The map below was recently provided by the Superintendent of the Diablo Range District. The Diablo SP Reference Map identifies 17 “Historic Locations of Traffic Incidents.” When we asked him to clarify what that meant, he said “Bike vs Vehicle Collisions from 2010 to 2021.” 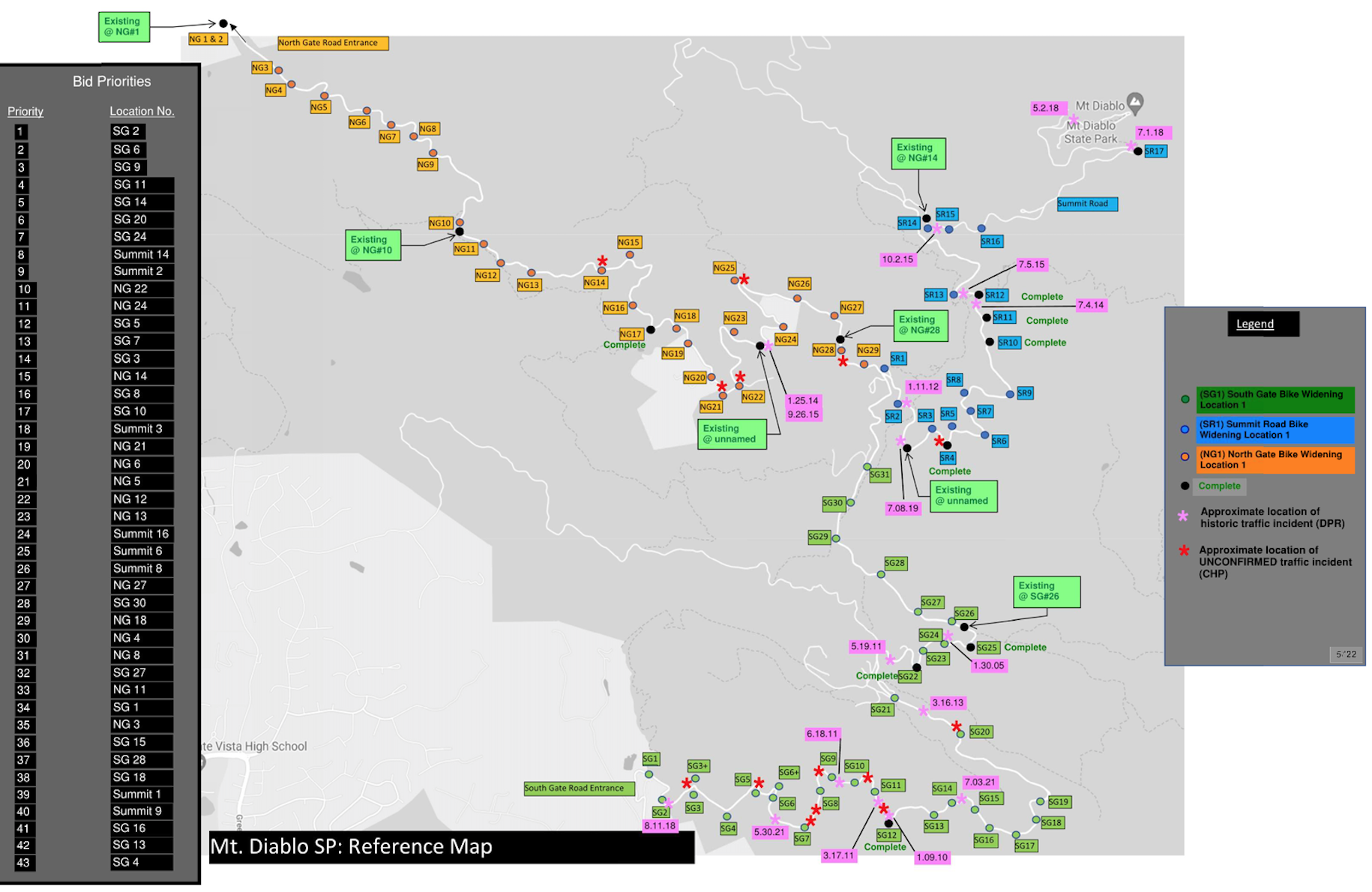 The Traffic Accident Data below was provided by the MDSP Superintendent in 2015.

It includes “off-road and paved.” We are interested in Bike vs Vehicles Collisions on the paved roads of Mount Diablo. NOT “off-road” mountain bike collisions. Apparently, NO other analysis has ever been done by California State Parks. 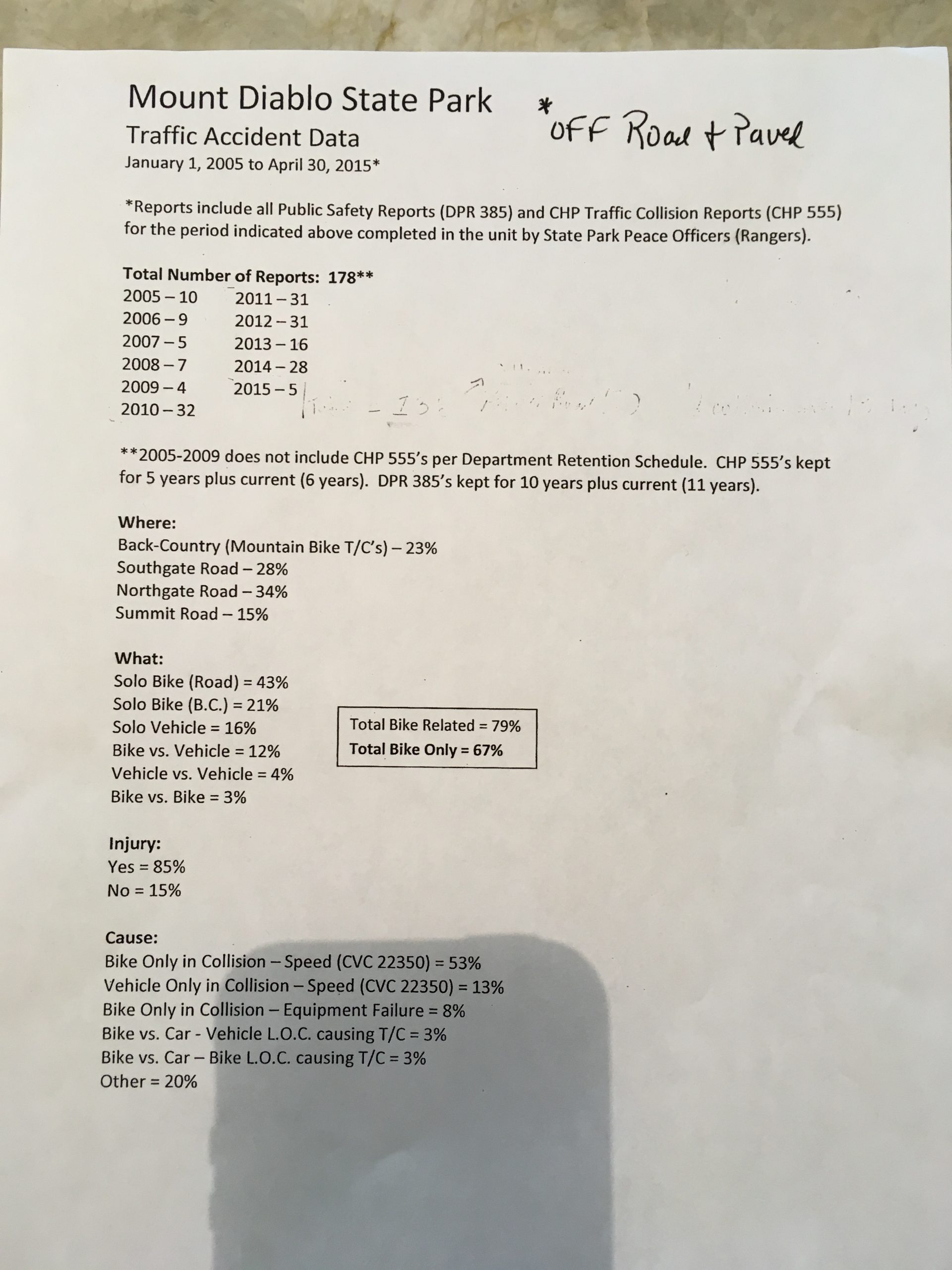